A Celtic Christmas: Geoffrey Castle to perform in concert Sunday

Violinist Geoffrey Castle and a cast of dancers, vocalists and musicians will appear in ‘A Celtic Christmas’ Sunday at the Wallenstien Theater.
Courtesy photo

Musician Geoffrey Castle will appear in concert with the Seattle Irish Dance Company, his band, vocalists and a bagpiper in ‘A Celtic Christmas’ Sunday.
Courtesy photo

MOSES LAKE — Musician Geoffrey Castle will bring a Celtic twist to Christmas music Sunday. The curtain goes up on “A Celtic Christmas” at 5 p.m. at the Wallenstien Theater, 6528 Northeast 26th Ave. on the Big Bend Community College campus.

The concert is a mix of music and dance, with Castle and his “all-star Celtic band” accompanied by the Seattle Irish Dance Company. Band members Steve Boyce, T.J. Morris and Mark Cardenas are veteran performers and from the Pacific Northwest. The performance will feature Irish tenor Dan Connolly and vocalist Emily McIntosh.

In an earlier interview Castle described it as “a Celtic rock show with amazing dancers,” featuring Christmas music that has been performed for centuries.

Castle said Celtic music always appealed to him. His band would include Irish music in its repertoire, he said, and when they started playing the Celtic tunes, “I’d notice that’s when the party would start. People loved it.” He decided to focus on the Celtic sound as a result, interpreting it with the help of his extensive background in rock, blues and jazz, among others, he said.

Castle’s concerts features historic Christmas music, songs and instrumentals that date back half a millennium and more. Castle said he loves the music, but only gets the chance to play it during December.

Celtic bagpiper John Blunt will perform before the concert and during intermission.

The Seattle Irish Dance Company was founded in 2012 and bills itself as the “premier professional Irish dance company based in the Pacific Northwest.” Members of the company are professional dancers, but they all have day jobs, ranging from urban planning to nursing.

The Moses Lake concert is the last of five performances in central Washington; other concerts are scheduled for Omak, Chelan, Leavenworth and Ellensburg. A portion of the proceeds goes to a scholarship fund for high school seniors in each of the concert towns.

Tickets are available at the Moses Lake Chamber of Commerce office, or can be purchased online at www.ChristmasinWashington.com.

Musician Geoffrey Castle will appear in concert with the Seattle Irish Dance Company, his band, vocalists and a bagpiper in ‘A Celtic Christmas’ Sunday. 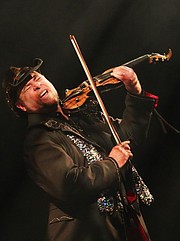 Musician Geoffrey Castle will perform at the Wallenstien Theater Sunday.